An inspection of an object is possible only within the Open Door Day, the possibility of logging in before the event on the page Login to the Open Day. 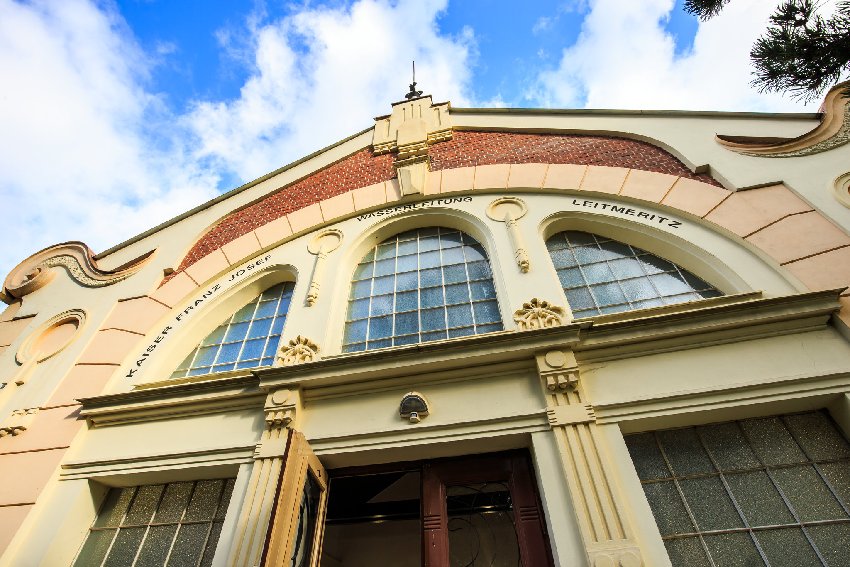 The visitation of the object is possible only within Open Door Days. The possibilty of registration before the event is on the webpage Log on to Open Door Day.

At the time of its commissioning, the water supply was a very important building, as evidenced by the fact that it was named "Franz Josef Wasserleitung" at the request of the town of Litoměřice and with the permission of Emperor Franz Joseph I. The city of Litoměřice, for a while, solved a long-standing problem with the city's drinking water supply. According to preserved materials, the construction was a regionally significant building, not only from a technical point of view, but also from a social and political point of view.

There was no documentation for the gas station itself. Only two photographs from the year 1903 were taken shortly after the water supply and the gas station were put into operation. The only documentation that exists is probably the first design by Adolf Niklas, which was not implemented later. This documentation dates back to 1898 and, as a gas station, it deals with an object its disposition and architecture is completely different from the later constructed buildings. The reason was probably the change of technology. The original design assumed pump drive with two relatively robust steam boilers. The proposed steam propulsion was replaced by gas. The set, which was shipped to the Škoda Plants in Plzeň on June 17, 1902, was finally powered by gas engines that were made from coke at a gas station.

Several important changes have taken place during the course of life. First of all, in 1930, the original drive unit, at that time outdated, was replaced by a modern aggregate. It is a diesel generator manufactured by the German company Deutz, Cologne. This machine, which is still in the museum area, is undoubtedly the pearl of the exhibition. After a complete reconstruction, it is now fully functional. It can be said that it is mainly from a technical point of view, but today also from a historical one, a very valuable unique. Another major change was the first reconstruction that the gas station probably underwent in the thirties or forties, of the twentieth century. Precise dating cannot be determined, it can only be deduced from used building materials and structures. It is possible that this reconstruction in some way followed the change of the technological equipment of the gas station. During the reconstruction, there were some interventions in the supporting structure of the roof and the construction of a wooden beamed ceiling, which formed the floor of the second above-ground floor roughly halfway through the ground floor of the operational part of the building. Also, the exterior appearance of the building has undergone some changes in this reconstruction, especially the replacement of windows, the construction of dormers and the removal of chimneys. These structural modifications are already irreversible mainly due to static and have been respected in the current reconstruction of the building.

Other construction works were busily realized in process of the sixtieth and seventieth of the 20th century. The changes were mostly concerned with the internal disposition of an object but also there were done some interference with the resemblance of an object and from the architectonic aspect especially these construction works were the most devastating ones. Due to these destructive changes the object was absolutely degraded from the architectonic point of view. In the middle of the seventieth, the new water preparing plant was built nearby and the heating oil store was absolutely irrationally built directly next to the gas station object. After the new water preparing plant was put into operation, the gas station object was deserted. Since then it was used only partially as a workroom or garage. Almost no service was done there and the object gradually dilapidated and its stage got rapidly worse.

Today the gas station is again in excellent condition, the same as it was hundred years ago at the moment of opening. There is an interesting exposition that tells about the history of water supply in the Litoměřice region. This all was done because we tried to compliment the generations of water managers who worked in the region of North Bohemia before us.

The water supply museum is registered in the catalogue of historical monuments and events published on the occasion of the European Heritage Days 2003, and it was also attracted by the authors of TV show „Toulavá kamera“.

© 2017 WebActive s.r.o., powered by WebJET CMS
Home Sitemap Top
When browsing this website, Severočeská vodárenská společnost a.s. uses your personal information, including cookies, for the purpose of evaluating website traffic and generating related statistics.
More information about processing your personal data and your rights you can find here.